In a podcast recorded with A&S last year, Assistant Professor of Sociology Shannon Bell described her recent book, Our Roots Run Deep as Ironweed: Appalachian Women and the Fight for Environmental Justice, as a project that gives voice to her subjects: women fighting against the environmental effects of coal mining in Appalachia. These women live in regions directly affected by the environmental health costs associated with mountaintop removal coal mining, and they face numerous barriers to speaking out against the injustices they witness.

Since its publication, Our Roots Run Deep as Ironweed (published in 2013 by the University of Illinois Press) has received a number of awards for its innovative methods and academic activism. Earlier this year, Bell’s book was a Nautilus Book Awards Silver Medal Winner in the Journalism/Investigative Reporting category, and it was also selected as Runner-up in the General Non-Fiction category at the 2014 Green Book Festival. 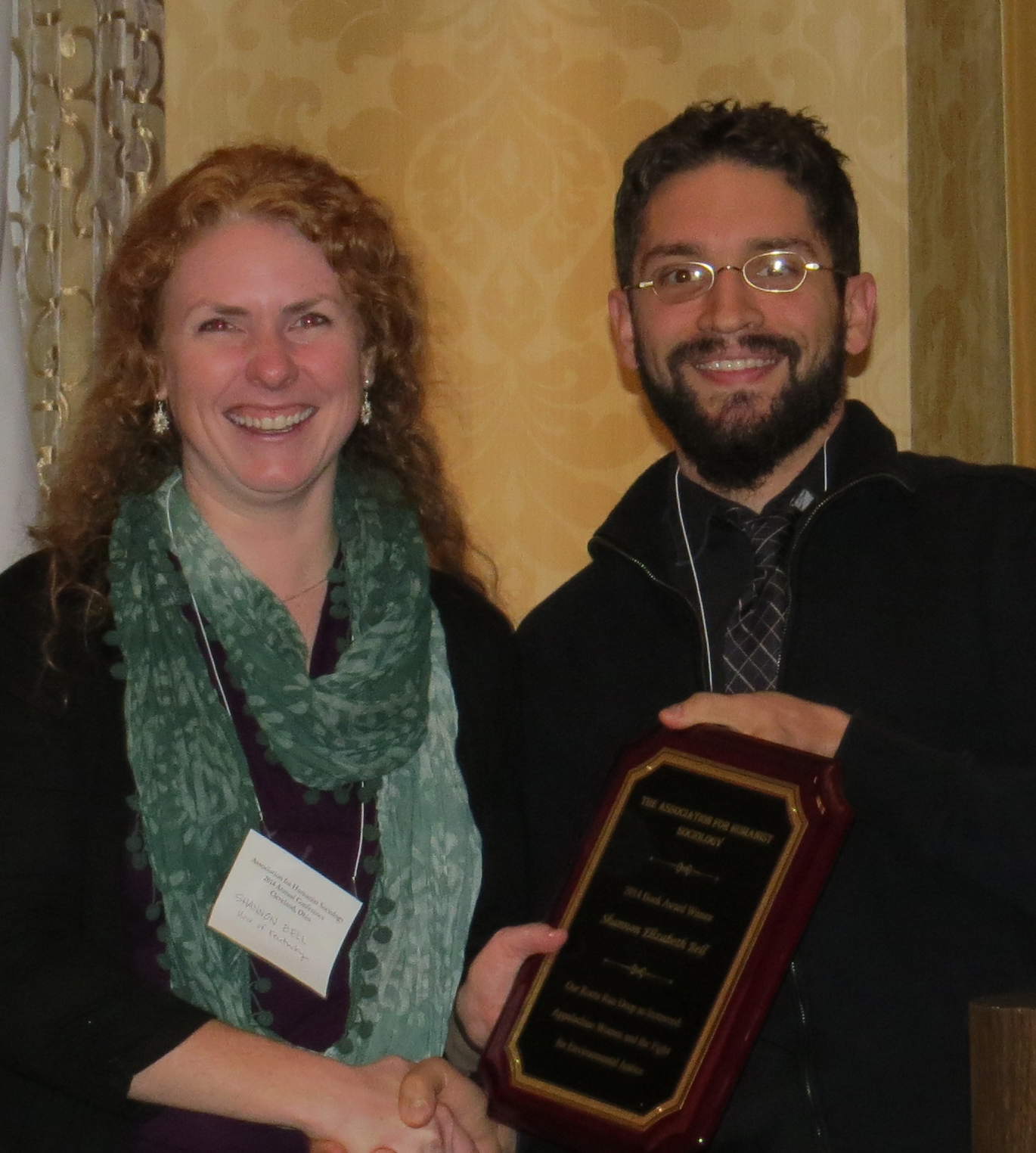 Most recently, Bell travelled to Cleveland, Ohio, to accept the 2014 Association for Humanist Sociology (AHS) Book Award. The AHS is a professional organization committed to “using sociology to promote peace, equality, and social justice.”

Bell’s book was selected as co-winner of the AHS Book Award from a pool of over 60 books published in 2013. Our Roots Run Deep as Ironweed was chosen because of Bell’s theoretical foundations in social science, systematic and innovative research methodologies, critical discussions of social justice and equality, and engagement with solutions to the social problem, namely the effects of mountaintop removal coal mining on Appalachian Mountain communities.

The continued success of Bell’s book amplifies the voices of the twelve activist-women profiled in her work. Bell remarks, “The recognition the book has received has been an incredible honor, one that I wish to share equally with the women whose stories fill the pages of the book.” She hopes that the book’s success will continue to raise awareness for these and other stories of environmental injustice.

Although writing about mountaintop removal mining’s damage to the environment and health of nearby residents can be overwhelming at times, Bell has said that she finds the activism of the women she interviewed inspiring. By having the women narrate their own stories, Bell celebrates their activism.

In reflecting on the impact these women have had on her, Bell says, “knowing the tremendous sacrifices these women have made and the risks they have taken to stand up for the protection of their families, communities, and mountains has made me a braver person, both personally and professionally.” Through them, Bell is inspired to pursue research that has social and environmental value, not just academic value.

Bell is hopeful that the recognition Our Roots Run Deep as Ironweed has received will, likewise, inspire readers. She suggests that those concerned about the environmental and public health impacts of mountaintop removal coal mining and other damaging industry practices could call their elected officials, write Letters to the Editor, or advocate for the passage of the Appalachian Community Health Emergency (ACHE) Act. Readers might be moved to support the work of grassroots environmental justice organizations in Central Appalachia like Coal River Mountain Watch, Ohio Valley Environmental Coalition, and Kentuckians For The Commonwealth. Through these channels, she hopes even more voices can be heard.

Photo: Shannon Bell with Damien Contessa, one of the judges on the Association for Humanist Sociology Book Award Committee, at the event in Cleveland, Ohio.