Thomas Janoski was raised on the Detroit border of a Finnish mother and a Polish father. He worked in the auto industry, trained as an infantry solider, and traveled around the world for two years. After working an an investigator for the Veterans Administration, he has taught at the University of California, Berkeley for two years, Duke University for nine years, and the University of Kentucky for the last two decades. He has participated in USTA league tennis for many years. He also plays jazz standards on alto and tenor saxophone, and klezmer tunes on the clarinet. He is active in Special Olympics and the ARC, and has been a swim coach for the Fintastics Swim Team for the last 20 years.

Professor Janoski's interests include political economy and unemployment, citizenship and civil society, lean production and the sociology of work, the welfare state, volunteering and social policy, immigration and naturalization, complex organizations and industrial relations, and comparative and historical methodology.

In the field of work and global political economy, he has four book projects. First, he and Darina Lepadatu from Kennesaw State University have assessed eight different models of global production that have largely replaced Taylorism (scientific management) and Fordism (mass production). This work is titled Dominant Divisions of Labor: Models of Production that have Transformed the World of Work (2014, Palgrave-MacMillan Press). Second, with David Luke and Chris Oliver, he published a book on structural unemployment and inequality: The Causes of Structural Unemployment: Four Factors that keep People from Getting the Jobs they Deserve (2014 in the Work and Society Series at Polity Press). Building on these works build and a previous book with Darina Lepadatu -- Diversity at Kaizen Motors: Gender, Race, Age and Insecurity in a Japanese Auto Transplant (2011, University Press of America) -- he and Darina recently received a contract to edit The International Handbook of Lean Production (Cambridge University Press), which will involve the top authors in the fields of theories of lean production, the diverse industries that use this technique including services, and how lean production is implemented in 15 countries around the world.

In the field of political sociology, he published The Ironies of Citizenship on naturalization policies in 18 advanced industrialized countries over decades and centuries. research interests also focus on immigration and naturalization in advanced industrialized countries.  In 2010 he published a research monograph The Ironies of Citizenship: Naturalization Policies in Advanced Industrialized Countries at Cambridge University Press. This involves a comparative historical study of naturalization rates in 18 OECD countries with a “fixed effect vector decomposition” regression analysis of over 500 country-years.  It also includes historical case study comparisons of selected groups of  countries (the colonizers -- UK and France, the settler countries – the Australia, Canada, New Zealand and the US, a colonizer and a non-colonizer -- Germany and Austria, and the Netherlands and Belgium, and the Nordic countries – Sweden and Denmark).  It is based on a two year National Science Foundation Grant and builds on his 1998 book Citizenship and Civil Society. He was lead editor of The Handbook of Political Sociology (2005, Cambridge University Press), and is currently the lead editor of The New Handbook of Political Sociology (forthcoming in 2018, Cambridge University Press). In 2017-18 he will be the chair of the Political Sociology Section of the American Sociological Association and will plan the activities at the 2018 convention in Philadelphia.

Professor Janoski has three books coming out this year. In April of 2020 The New Handbook of Political Sociology (Cambrdige University Press) covered the breadth of political sociology in over a thousand pages of work by the top political sociologists in the field. He and Darina Lepadatu in March 2020 published Framing and Managing Lean Production in the New Economy (Routledge), which is about the different views of social science disciplines and how lean is implemented in 10 corporations from Toyota to Costco. And The International Handbook of Lean Production will come out in late 2020 at Cambridge University Press. It will have 29 chapters on many different views of lean production as they occur in various industries and countries. He is currently working on Political Sociology: A Synthetic Theory. It will combine micro- and macro-psersectives (symbolic interaction, power resoruces, social exchange theory, field theory, and institutions), which will be quite innovative.

He has written three research monographs including: The Ironies of Citizenship: Naturalization Policies in Advanced Industrialized Countries (Cambridge University Press, 2010). Citizenship and Civil Society (Cambridge University Press, 1998, and translated into Chinese) The Political Economy of Unemployment (University of California Press, 1990, and translated into Spanish). He has also cowritten Strategies for Sucess among African-Americans and Afro-Caribbeans with Chrystal Grey (Lexington Press, 2018), Diversity at Kaizen Motors with Darina Lepadatu (University Press of America, 2011), and Dominant Divisions of Labor with Darina Lepadatu (Palgrave MacMillan 2014).

Dr. Janoski's most recent work appears in The Journal of Civil Society, Comparative Social Research, and Citizenship Studies. He has also written articles for numerous journals including Social Forces, The Sociological Forum, Sociology of Religion, and International Journal of Comparative Sociology. 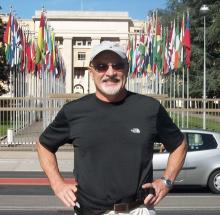