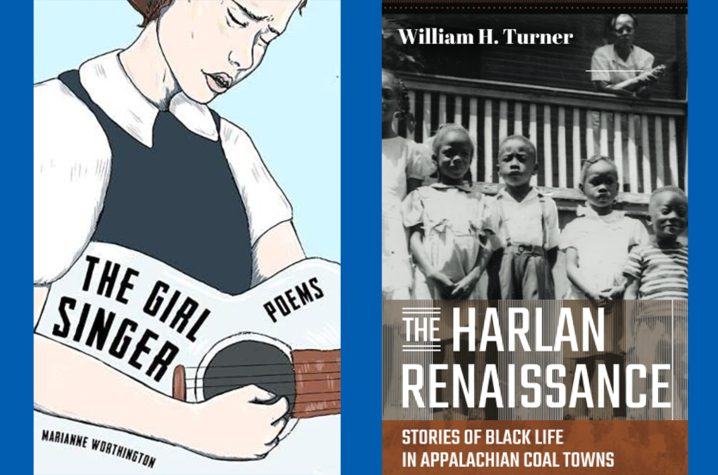 LEXINGTON, Ky. (April 6, 2022) — The University of Kentucky is celebrating two book winners of the Weatherford Awards, which were announced at the 45th annual Appalachian Studies Association conference March 17-20 at West Virginia University.

“The Girl Singer” by Marianne Worthington was published by the University Press of Kentucky and won in the poetry category. "The Harlan Renaissance: Stories of Black Lives in Appalachian Coal Towns" (WVU Press), written by UK alumnus and College of Arts & Sciences Hall of Fame member William H. Turner, won in the nonfiction category.

The Weatherford Awards are given by Berea College and the ASA each year. Fiction, nonfiction and poetry are the three categories recognized, each receiving a $500 award. Over 40 books were nominated this year.

“The Girl Singer” by Marianne Worthington

“The Girl Singer” threads together poems about feminism, Appalachian culture and country music. It is part family history, part music and part nature walk. Worthington’s attentive eye and heart are reflected in the starkly striking and painful images she paints in the poems. Every poem, whether describing a connection with Appalachian wildlife, retelling the lyrics of a classic country tune, reflecting on the speaker’s bloodline or giving voice to famous musical figures of the past, strikes a powerful chord.

Originally from Knoxville, Tennessee, Worthington moved to southeastern Kentucky in 1990. She teaches communication studies and media writing at Berea College and often teaches poetry and nonfiction writing classes for workshops and conferences. She has received the AI Smith Fellowship from the Kentucky Arts Council and the Appalachian Book of the Year Award for her book “Larger Bodies Than Mine.” In 2009, she also co-founded Still: The Journal, an online literary magazine that publishes work tied to the Appalachian region.

“The Harlan Renaissance” is an intimate remembrance of kinship and community in Eastern Kentucky’s coal towns. Turner reconstructs Black life in the company towns in and around Harlan County during coal’s final postwar boom years, which built toward an enduring bust as the children of Black miners, like the author, left the region in search of better opportunities.

Turner was born in Lynch, Kentucky, in Harlan County. He received a bachelor’s degree in sociology from UK and a doctorate in sociology from the University of Notre Dame. He also attended the Foreign Affairs Scholars Program at Howard University and did postdoctoral work at the University of Pennsylvania and Duke University. He also served as the vice president of multicultural affairs at UK. The Appalachian Studies Association honored him for a lifetime of service to the region, and he was inducted into the Kentucky Civil Rights Hall of Fame in 2007. In 2020, he received an honorary doctorate from the University of North Carolina Asheville. In 2021, he was inducted into the UK College of Arts and Sciences Hall of Fame.

“I attribute a goodly bit of this recognition to the longstanding relationships I have been blessed to have with fellow students, friends, teachers, staff and fellow administrators I came to know over the long period of my affiliation with the University of Kentucky,” Turner said.