In the 1930s, the Dust Bowl and the legacy of massive post-Civil War cut-out-and-get-out logging and, particularly in the south, of what amounts to shifting cultivation brought a soil erosion crisis to the attention of the USA and the world. In the 1980s, a realization that problematic erosion persists despite great improvements in soil conservation and a heightened concerned with nonpoint source pollution from agriculture brought renewed attention to erosion, this time focused particularly on off-site impacts. On-site impacts of soil erosion are the environmental degradation and lost productivity due to soil loss, while off-site impacts are related to pollution and costs associated with where the soil ends up. Now, we are at it again, with another wave of attention to soil erosion.

What is the role of public art in an educational environment? How should we engage with our institutional past, in terms of art already at the University of Kentucky, and any proposed future projects? Who decides about public art on campus and how is the university community involved in the process?

New Maps Speaker: Sarah Williams "More Than Data: It's What You Do With It"

The online-first version of an article I co-authored with Chris Van Dyke is now available from Earth Surface Processes and Landforms: “Principles of geomorphic disturbance and recovery in response to storms.”

How to Get Scientists to Ignore You

OK, so I tried to read Salvatore Engel-Di Mauro’s 2014 book, Ecology, Soils, and the Left: An Ecosocial Approach. As a geomorphologist who studies soil erosion (among other things), and as an environmentalist/conservationist interested in the human dimensions of erosion, it seemed a worthwhile piece of work (and probably is).  Years ago I was greatly influenced by Piers Blaikie’s 1985 The Political Economy of Soil Erosion—it even inspired me to develop a (widely ignored and little used, but I tried) method for modeling/estimating soil erosion in less developed countries where technocentric North American and European approaches were unlikely to be applicable.

Blaikie critiqued—often strongly—geomorphologists, soil scientists, and engineers. But he did so without insults and putdowns of scientists and science.

Not so Engel-Di Mauro. A few samples:

Biophysical scientists have proven historically to be largely subservient to the ruling regime of the day (and sometimes emphatically aligned with the ruling classes).

In 2012, I published an article in Earth-Science Reviews called Storytelling in Earth sciences: the eight basic plots.  Just for background, the abstract reads thus:

Karst development is strongly influenced by climate, both directly (via the moisture balance and temperature regime) and indirectly. The indirect effects include biogeomorphic impacts of biota, and base level changes associated with sea-level and river incision or aggradation. The literature on cave and karst landscape evolution has plenty on the general influence of climate on karstification, the role of base-level changes, and speleothems as proxy records of climate change.  There is little on how (or whether) direct effects of climate change influence the rate or nature of karst development.

There sometimes exists an intuitive or cognitive disconnect between the idea that Earth surface systems (ESS) may exhibit divergent evolution associated with dynamical instability and deterministic chaos; and the fact that ESS sometimes evolve so as to increase their complexity and interconnectedness.  Despite the initial apparent inconsistency, these two phenomena can and do happen simultaneously within the same ESS.

Instability/divergence and evolution of increasing complexity are readily reconciled when you realize that instability and chaos are scale-contingent, so that divergence and pseudo-randomness occur within firm limits. Also, these phenomena in effects expand the options an ESS has for its development, thus creating more room for evolution of complexity.

The ecologist Robert Ulanowicz developed the notion of ascendancy as a measure of the complexity and interconnectedness of a system. Ascendancy is influenced by the quantity of matter and energy throughputs, and the network of mass/energy exhanges between system components. Almost 10 years ago (!) I used the notions of ascendancy and Kolmogorov entropy to show how dynamical instability and chaos can increase ascendancy.

Geoscientists modeling landscape evolution overwhelmingly (not exclusively, but indeed overwhelmingly) emphasize geophysical aspects, mainly tectonic uplift and erosion. Erosion is typically modeled based on some form of the stream power law, where erosion rates are a power-law function of stream discharge and slope. Discharge is itself often assumed to be a function of drainage area.  There’s nothing wrong with studying the interactions of uplift and denudation without paying much heed to climate, biota, and other factors; I’ve dabbled in this myself.

More shameless self-promotion: The online first version of my new article in Progress in Physical Geography is now available: Biogeomorphology and Contingent Ecosystem Engineering in Karst Landscapes. It is not uncommon to acknowledge anonymous reviewers in an article, and I do so here, but it does not do justice to the breadth, depth, and insight of comments I received on an earlier version from three reviewers (which ran to 14 pages!). Whatever the flaws of the final product, it is a heck of a lot better as a consequence of their efforts. Thanks, whoever you are! 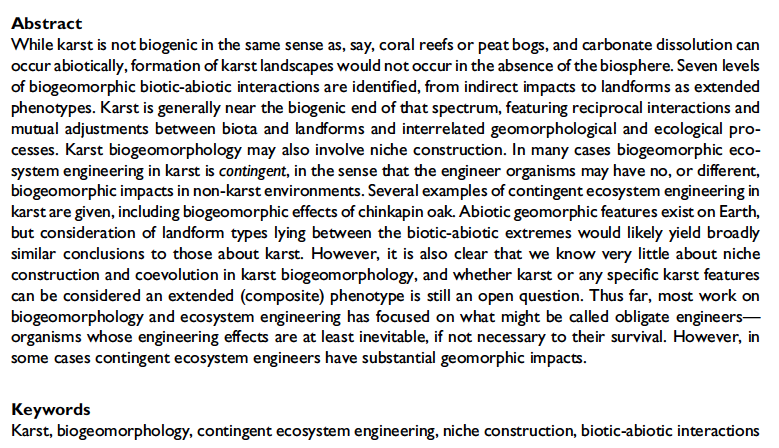