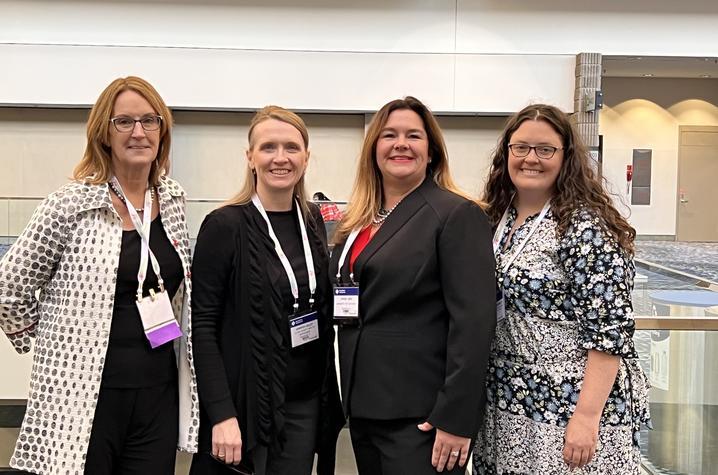 LEXINGTON, Ky. (April 20, 2022) — More than two years into the University of Kentucky’s $87 million HEALing Communities Study (HCS) to address the opioid epidemic in Kentucky, it is possible to see the life-changing impacts it has already made in the eight counties of the study’s first wave.

Launched in 2019, the ambitious four-year study includes a multidisciplinary team of more than 25 researchers spanning seven colleges across UK, and leverages existing resources and initiatives in partnership with communities to implement various strategies to reduce opioid deaths across Kentucky.

Evidence-based practices implemented by the HCS team in partnership with behavioral-health and criminal justice agencies include effective delivery of medication for opioid use disorder, overdose prevention education and the distribution of naloxone, a life-saving medication that reverses the effects of opioids. The team, which includes Carrie Oser, DiSilvestro Endowed Professor in the Sociology Department, has also been working with various pharmacies and health care providers to implement safer opioid prescribing and dispensing.

The randomized study includes 16 Kentucky counties impacted by opioid abuse and is broken down into two waves of eight counties each. The first wave, collectively known as WAVE 1, includes Boyd, Boyle, Clark, Fayette, Floyd, Franklin, Kenton and Madison counties. Community coalitions in each county determined what interventions to implement based on individual community need.

With WAVE 1 nearly complete, current metrics illustrate the project’s impact so far. In partnership with 146 agencies in WAVE 1 communities, HCS has:

“The evidence-based practices implemented by the HEALing Communities Study team, along with state and community partners, have made an impact on thousands of lives across WAVE 1 communities. As the study continues, their work will help us better understand what’s needed in each community and where to focus and ramp up efforts to best support patients to reduce opioid overdose deaths,” said HCS principal investigator Sharon Walsh, a professor in UK’s College of Medicine and College of Pharmacy and director for the Center on Drug and Alcohol Research. “Our goal is that the changes implemented in these communities develop into sustainable solutions for the opioid epidemic in the Commonwealth and throughout the nation.”

The intervention also includes community engagement to assist key stakeholders in applying evidence-based practices and a communications campaign to build demand for treatment and reduce stigma toward people with opioid use disorder.

The WAVE 1 intervention ends this summer, with the sustainability phase beginning in July. This phase is intended to build capacity to help community coalitions and partner organizations sustain the evidence-based practices after the study ends. Walsh says this includes community staff and budget planning, and that HCS is also working with state partners at the Kentucky Opioid Response Effort (KORE) on sustaining naloxone distribution.

The intervention for WAVE 2 communities -- Bourbon, Campbell, Carter, Greenup, Jefferson, Jessamine, Knox and Mason -- begins July 1. WAVE 2 is in the preparation phase, which is intended to establish the infrastructure in communities to support the interventions. So far, the HCS team has had 134 meetings with 174 stakeholders and has identified 85 potential coalition members for WAVE 2.