Like many other river scientists and managers in recent years, I have occupied myself quite a bit with considerations of hydrological and sediment connectivity in fluvial systems. In my case, channel-floodplain connectivity in alluvial rivers has been a particular concern.

In examining some of the imagery obtained during floods in Texas following Hurricane Harvey, I was reminded of something that I would not have disputed but have never really focused on either—the profound effect of human structures and modifications on floodplain hydrology and geomorphology. In urbanized areas this has long been pretty obvious, but even in rural areas the effects can be striking.

The images below all came from the U.S. National Geodetic Survey (https://storms.ngs.noaa.gov/storms/harvey/index.html#7/28.400/-96.690). The imagery was acquired by the NOAA Remote Sensing Division, with an approximate ground sample distance for each pixel of 0.5 m. Images were collected near the peak of flooding in many cases.

First, check out the image below of the Brazos River west of Houston, in the suburban enclave of Sugarland. The image acquired 31 August 2017 is overlaid by GIS coverage of roads. Other than the two crossings, there is little direct encroachment on the active floodplain here, but fluvial and alluvial processes are clearly hemmed in by urban and suburban development. 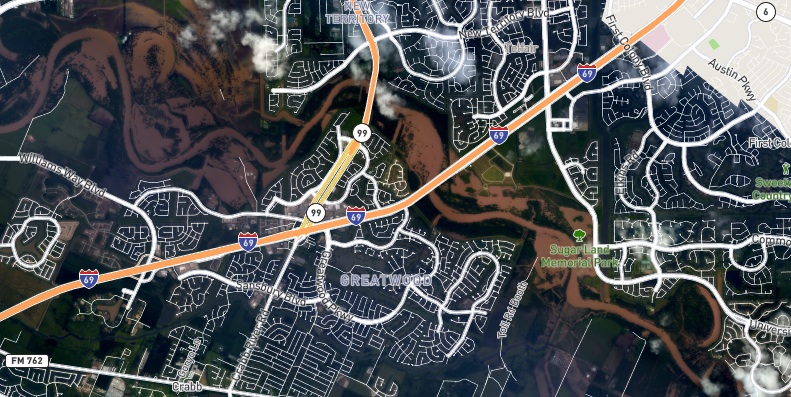 Now look at this image from further downstream, near Rosharon, TX. Note the ruler-straight floodwater boundaries associated with levees in numerous situations. These limit flooding in certain areas surrounded by floodwater, limit downvalley floodplain flow west of the Brazos River, and apparently limit the spread of floodwaters to the east. 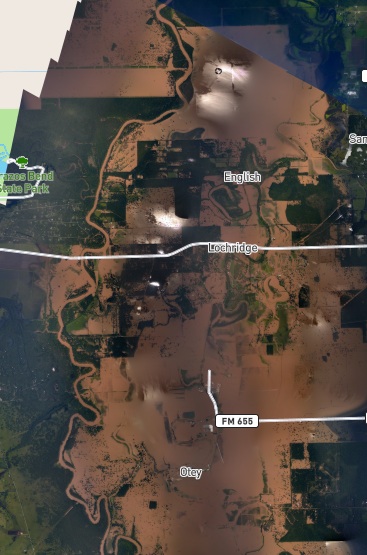 East of the Houston area, the image below shows the Trinity River between Liberty, and Dayton, TX. The flooded area west of the river is dominated by an alluvial depression that is largely at a lower elevation than the Trinity’s alluvial ridge. Given this, this location might well be ripe for an avulsion, especially given the paleochannel evident south of U.S. 90.  However, the highway causeway and levees limit crevasse or overbank flow through this zone. Note also the flooded power line right-of-ways south of U.S. 90. I have seen this phenomenon (collection or conveyance of floodwaters in rights-of-way) elsewhere, too. 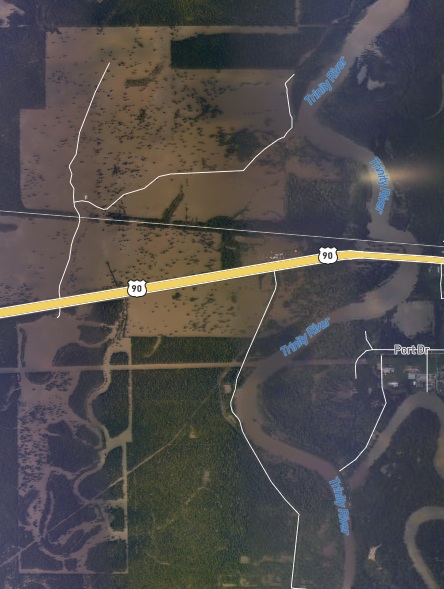